CartoType has functions to find addresses and perform geocoding, which is converting a position to an address. You can try out these functions using the Windows demo. Use the 'Find address' menu item in the 'Find' menu to find an address. You can fill in any of the fields. Just leave fields blank if they are not needed or the information is unknown. Searching is faster if you provide the city, state, county, or province when searching for a street address. 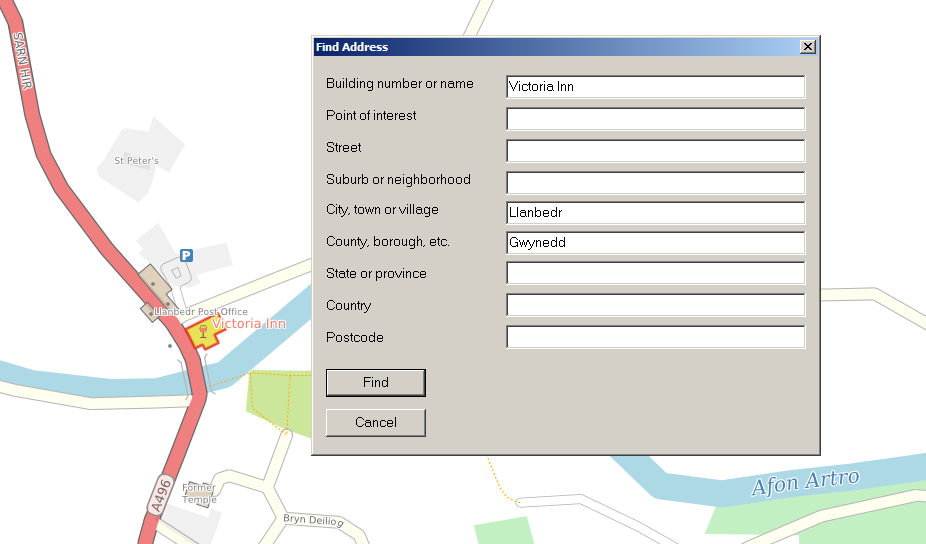 Right-click anywhere on the map to geocode the position. CartoType geocodes the nearest object which might have an address. If you click one or near a building it will try to create an address for that building. 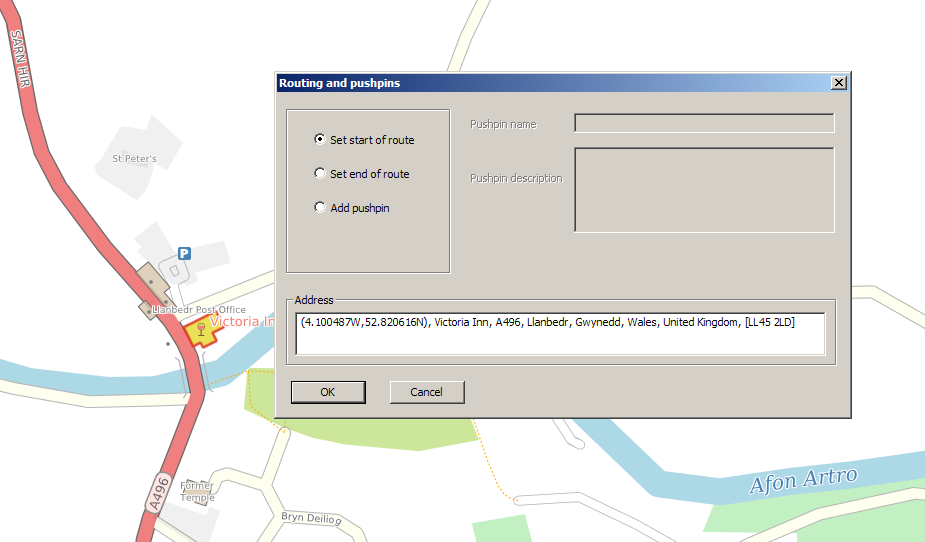 The parts of an address

CartoType returns an address as up to ten different parts:

The building number or name, or both. If both are provided, they are separated by a comma, with the number second.

A land or water feature like a park, hill, or lake.

The street or road which the building is on. This is sometimes indicated in the map data, but if not, CartoType uses the nearest named street.

The suburb or neighbourhood if any.

The enclosing island if any.

The lower-level administrative area: in OpenStreetMap terms this is a level-6 boundary: US or UK county, German Landkreis or Kreis, Frenche dÃ©partement, etc.

The nation, including overseas constituent states.

Postal codes (e.g., UK postcodes or US ZIP codes) are obtained using the best available information: the postal code attribute of a map object, or the enclosing postal code polygon if any, or the nearest postal code point. CartoType can import postcode data from GeoNames when creating maps.

APIs for geocoding and finding addresses

This section describes the main C++ API functions. For the other three APIs (.NET, iOS and Android) please see the relevant pages for those platforms. All four APIs are almost identical.

The CartoType::CAddress object is used both for providing addresses, when searching for them, and returning them. It is just a collection of strings for the different parts of the address as described above:

To find an address, use:

The found objects are returned, in approximate order of relevance, in aObjectArray. aMaxObjectCount is the maximum number of objects to return, and aFuzzy tells CartoType to use fuzzy string matching. You need to fill in at least one of the fields in aAddress.

If you want to give the user some help in filling in the fields, you can provide an incrementally-matched list of probable names by calling this function:

To geocode by converting a location into an address, use

and to geocode from a map object, which will in practice always be one that was returned by one of the Find functions, use

The geocoding API functions described above are very convenient for interactive applications where the user can click on the map to get an address. However, you can also use them for bulk geocoding, without the need to draw a map or create an interactive application. Just load a map in, call GetAddress with each location in your list, and write the results to a file.