Our evaluation SDKs allow you to use almost all the features of CartoType in a test application so you can determine if CartoType is the right solution for you.

Evaluation SDKs (software development kits) allow you to try out CartoType before you buy a license. You will be able to create a test application and  find out whether CartoType is the right solution for you. The evaluation SDKs have a few restrictions, including placing a watermark on every map, but provide access to the complete API (application programming interface) and all features including graphics-accelerated rendering.

The CartoType evaluation SDKs (software development kits) are provided for evaluation only, excluding any commercial use. For commercial licensing please contact us.

By clicking on any of the links on this page, or by using the SDK material or demonstration programs, or source code, however acquired, you accept the terms of the CartoType Evaluation License and you also accept that neither CartoType Ltd, nor any owners, shareholders or officers of CartoType Ltd, or any other contributors to, authors of or maintainers of the CartoType system, are liable for any damage, direct or consequential, caused by downloading, installing or using the SDK, or by any programs built using the SDK, and that the SDK is not warranted fit for any particular use and is for evaluation use only and may not be used for any commercial purpose.

To uninstall any of these SDKs, all you need to do is delete the files from your computer.

To save download time, the SDKs contain only a single sample map. It is of the Isle of Wight, an island off the southern coast of England, chosen because of its good mix of features: urban, rural, and coastal. Please contact us if you need a map of any particular area for evaluation purposes.

The current version of the CartoType SDK is release 6.2. It was released on 15th September 2020.

The Android SDK allows you to use CartoType with the Android operating system. You use the CartoType Android API, which gives you access to all the features of CartoType: loading maps, adding your own objects to the map, panning, zooming, address searching, routing and navigation.

The SDK is a ZIP file of about 22Mb. It contains a folder called cartotype_android_sdk_evaluation containing the following folders:

libs: an .AAR (Android archive) called cartotype.aar, which is the CartoType library. Add it to your Android Studio project as a dependency.

font: standard fonts; for simple CartoType use you need load only DejaVuSans.ttf

style: the standard style sheets; you should load standard.ctstyle with the sample map

CartoTypeMaps is a full-featured sample program for CartoType on Android. It's provided as an Android Studio project, and includes the handling of user gestures for panning, zooming and rotation, routing using different profiles, turn by turn navigation, finding placenames and addresses, night mode, and perspective mode. You can set the start or end of a route using a long press. Other features are available from the menus. CartoTypeMaps is ready to run. Just download the code or use git to clone the repository (git clone https://github.com/CartoType/CartoType-Public.git). Then load the project src/demo/android_demo/CartoTypeMaps into Android Studio, connect an Android device or simulator, and select Run 'app' from the Run menu.

You can also download a prebuilt version: CartoTypeMaps as an APK file (235Mb download). You can install it on your Android phone or tablet. It comes with a map of London and the surrounding area. You can easily load other maps if you prefer.

The iOS SDK allows you to build CartoType apps for the iPhone and iPad. It is supplied as a .dmg file (Apple Disk Image) containing the file CartoType.framework. You use the CartoType iOS API, written in Objective C, which gives you access to all functionality.

Note: in order to avoid linker errors when using the -ObjC flag, you need to have at least one ".cpp" (C++) or ".mm" (Objective C++) source file in your own project, even if it's an empty one. If your project has ".m" (Objective C) and ".h" files only you will get linker errors because Xcode won't know that there is both C++ and Objective C code in the project.

This is a 236Mb download containing the header files and compiled libraries for the simulator and device targets as a .dmg file. A sample map, style sheets, fonts and tools including makemap, the map building program, are also included. The download is large because it is a fat binary, containing versions of the libraries for different platforms and processors, and it is compiled using bitcode, which is now necessary for creating releasable iOS apps.

(If you are upgrading to a new version of the CartoType iOS SDK, you may sometimes find that Xcode does not recognize new Objective C headers or classes. You can usually fix this problem by closing your project, opening the organizer from the Xcode Window menu, select your project, then click on 'delete' opposite 'derived data'. Then close Xcode, reopen your project, clean it and rebuild. Thanks to TigerCoding for this tip from StackOverflow.)

You can also download the source code and project files for a full-featured sample app with fast hardware-accelerated rendering, handling of user gestures for panning, zooming and rotation, routing using different profiles, turn by turn navigation, finding placenames and addresses, night mode, and perspective mode. You can set the start or end of a route using a long press. Other features are available from toolbar buttons.

To build and run the app, open the project in Xcode on a Macintosh and add the CartoType iOS SDK to it. If you are a licensee you can use your licensed CartoType SDK instead of the evaluation version; change the call to the license() function in AppDelegate.swift so that it supplies your license key. You will need to sign the app using your Apple developer certificate.

You can then run it in the simulator or on an iOS device.

This SDK allows you to use CartoType with the .NET framework. You can use any .NET language, such as C#, VB.NET or C++/CLI. You can build a complete application using CartoType in just a few lines of code, as shown in the C# demo program included with the SDK. The .NET SDK (documented here) gives you access to all CartoType features, including map, style sheet and font loading, route calculation, navigation and address searching. It also gives access to graphics acceleration using OpenGL ES 2.0.

This is a 41Mb zipped file containing a .NET DLL built for the Intel x64 platform and a C# demonstration program that uses the CartoType DLL, with its source code and data files. An XML documentation file is also supplied. As long as it is kept in the same place as the DLL it will provide tool-tip help for some of the functions.

Note: if you have trouble adding the DLL to your project, in particular if you get a message starting "could not load file or assembly ... CartoTypeWrapper.DLL", please try the following fixes: (i) right-click on CartoTypeWrapper.dll in Windows Explorer and click on 'Properties' in the context menu, then, if you see the text 'This file came from another computer and might be blocked to help protect this computer', click 'Unblock' to the right of that text; (ii) if that doesn't work try installing, or re-installing, the Visual C++ Redistributable for Visual Studio 2017 (please google that phrase to find the current download link). 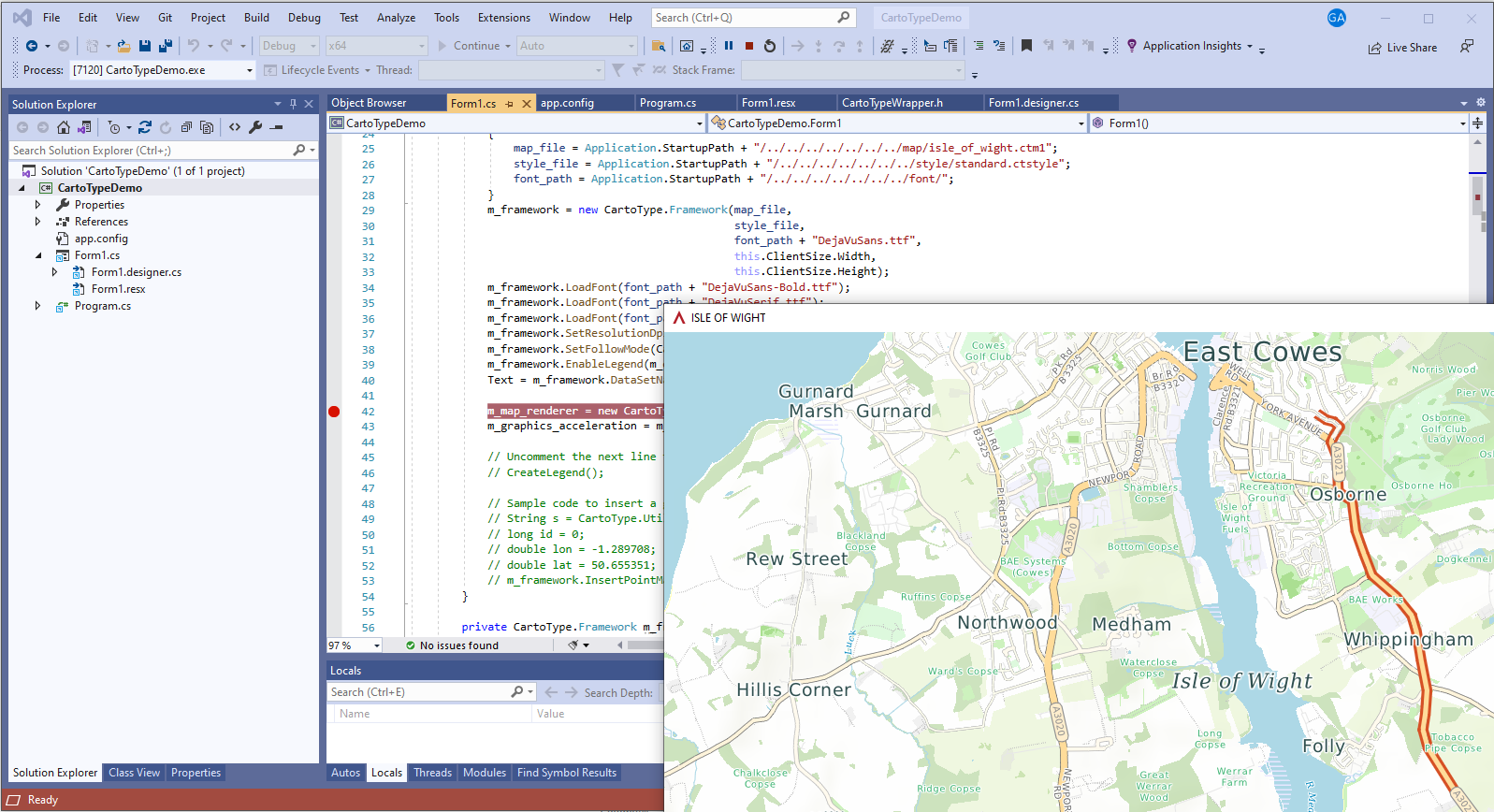 The DLLs used for graphics acceleration, libEGL.dll and libGLESvs.dll, are in the same locations as the .NET DLLs. They need to be accessible to any application using the CartoType .NET SDK.

Another style sheet and extra fonts are also to be found in the style and font folders. It's always a good idea to load DroidSansFallback as well as any other fonts, because it provides characters for many non-Latin scripts.

The CartoType .NET DLL will not run on non-Intel platforms because the CartoType library is compiled into native code from C++.

This is a 176Mb zipped file containing the CartoType header files and debug and release mode libraries for desktop Windows, built using Microsoft Visual Studio 2019 for the x64 platform.

There are also directories with the same names but with DLL appended: CartoType\bin\16.0\x64\ReleaseDLL, etc. They contain libraries linked to the C++ runtime library as a DLL, not statically. These libraries can be used with Qt. To build for Qt you will also need to link to CartoTypeQtMapRenderer.lib, which is also supplied. Qt is supported for the x64 builds only. See CartoType and Qt for detailed instructions on using Qt to build and run the sample Maps App.

Visual Studio solution and project files for the demonstration program

Another style sheet and extra fonts are also to be found in the style and font folders.

This is a 20Mb zip file containing a folder called cartotype-linux-sdk, which contains the following folders:

bin: the release-mode evaluation CartoType library, and the makemap tool for creating maps, and the other tools ctm1_info and encrypt_file, and (for Qt builds) the Qt map graphics-accelerated map renderer library libCartoTypeQtMapRenderer.a and other libraries needed for Qt builds.

font: standard fonts; for simple CartoType use you need load only DejaVuSans.ttf

header: the C++ header files; you need to include only one of the header files, cartotype_framework.h, to use CartoType

style: the standard style sheets; you should load standard.ctstyle with the sample map